Terry Reid could have joined Led Zeppelin but he turned them down. He also rejected the chance to join Deep Purple. Crosby, Stills, Nash and Young recorded one of his longs for their “Deja Vu” album, then left it off at the last minute. For three years at the commercial peak of his career, he was tied up in legal wrangles, unable to record. His favourite album was doomed when the label went bankrupt just after it was released. His follow-up wasn’t promoted by the record company, and died another speedy death. After twelve years without a new release, his comeback single this spring was meant to be a cover of the Waterboy’s “Whole Of The Moon”. No sooner was the record pressed up, than the original version was reissued and reached No. 1. Even hardened rock stars have committed suicide over less. Yet the Terry Reid who arrived in London last month to promote his new album, “The Driver”, was far from terminally depressed. Bronzed as befits a man who who lived in the States for two decades, Terry is otherwise the archetypal early Seventies Brit-rocker , happiest with a pint in his hand, and a bunch of mates around to share a laugh. For someone who toured America as a headliner when he was eighteen, he is refreshingly down-to-earth, with none of the superstar pretensions that mar the idols of the video age. And he still has that voice – a throat searing instrument of white soul , every bit the match of Rod Stewart or Paul Rodgers, which turns his new single, “Fifth Of July”, into an epic power-ballad worthy of saturation airplay.
Reid was fifteen when he was discovered by Peter Jay (of Jaywalkers fame), and launched as Britain’s answer to the Atlantic soulmen . In 1966, he toured Britain supporting the Stones, a year later he made his first single, “The Hand Don’t Fit The Glove” , for Columbia. He then formed his own trio, playing virtuoso guitar in front of an organist and drummer, and was signed up by Mickie Most, to join a stable that already included the Jeff Beck Group, the Yardbirds and Donovan. Most first tried to groom Reid as a balladeer, with the Long John Baldry style “Better By Far”, then he introduced him to America. His first album, the US: only Bang Bang You’re Terry Reid”, was a poor showcase for his talents; it’s likely that Terry’s rather off key contributions were nothing more than guide vocals, never intended for release. But when Terry toured America behind Cream, he made a tremendous impact at the 1966 Miami Pop Festival, and recorded the acclaimed “Terry Reid” album (since reissued on See For Miles, repackaged with his first two singles), his future seemed assured. The decision not to join Led Zeppelin assumed importance only in retrospect. More vital was his deteriorating relationship with Mick, Most, which left his career stagnant for three years or more. In the meantime, he moved to California, returning briefly for another dynamic performance at the Glastonbury Festival in 1971, and fell in with the new generation of L.A. rock poets, from Jackson Browne to CSNY .When his legal problems were eventually solved, he issued the “River” album, one of the lost classics of the Seventies. As before, though, its glowing reviews weren’t translated into sales. And for the rest of the decade, Reid seemed-at least to the casual observer – to be following a Paul Simon-like pattern of leisure broken by occasional visits to the studio,for albums in 1976 and 1979. Since then, nothing-until the new album, with its mix of revivals (“Fifth Of July”, “Whole Of The Moon”) and new Reid material like “Right To The End”, “Hand Of Dimes” and “Turn Around”. Trevor Horn handled some of the production, while Terry produced four tracks himself; and Enya , Joe Walsh , Stewart Copeland, Howard Jones and Tim Schmidt were among the friends who helped out. Terry Reid inspires that kind of loyalty; and he still has a voice to kill for. We caught up with him on a rare visit to London, and asked him to explain his reasons for being cheerful after a career as the hapless plaything of ill-intentioned fate. 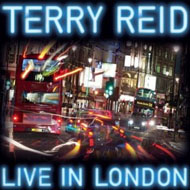 Sorry, Terry doesn't have and shows booked at the moment. Check back soon!